As some of you know, Dr. Hartman uses a slightly different technique to castrate male horses called the Henderson castration technique.  It involves the use of a power drill and a specialized clamp to literally twist off the testicle.  Traditional methods involve the use of an emasculator which crushes the tissue to ensure adequate termination of blood flow.   If the emasculator has been around for such a long time and works, why turn to power tools??

First, it’s important to understand that the top two risks associated with castration are hemorrhage (bleeding out) and evisceration (intestines protruding through the surgical site).

Prior to castrating a horse, every veterinarian should check for enlarged inguinal rings.  If present and palpable, enlarged rings could increase the risk of the intestines migrating into the scrotum and out the castration incisions (evisceration).  If this happens, it is an immediate life-threatening situation for the horse.  While we as veterinarian strive to avoid such situations, it is not always possible to palpate inguinal rings.  If not appreciably enlarged, this is a risk we cannot avoid no matter how diligent the practitioner.

The most common risk associated with castrations is hemorrhage.  The traditional method of castration utilizing an emasculator relies on the clamping and crushing action of the tool to staunch the flow of blood.  This process requires adequate time for the clamp to remain in place and does NOT involve the placement of any sutures or staples.  The success of the clamping process is 100% dependent on the quality of the tissue present, as well as the depth of anesthesia.  If the horse is waking up quicker than intended, you certainly won’t get to keep that clamp in place for an adequate amount of time!  This in turn can increase the risk of hemorrhage. Benefits of the Henderson Technique

The Henderson Technique greatly minimizes complications as well as reducing surgery time. When utilizing this castration technique the tissue surrounding the blood vessels is twisted upon itself multiple times with a special instrument attached to a power drill, leaving a sealed and tightly coiled spermatic cord end after testicles are severed. This serves as a more permanent ‘clamp’ and further reduces the risk of postoperative hemorrhage.  There are no sutures placed in this procedure either, decreasing the risk of having a foreign material present in the inguinal or abdominal regions.  In Dr. Hartman’s hands, the process is quicker and offers a better means of hemostasis with fewer post-surgical complications.

Due to the nature of the surgery, the incisions made in the scrotum are left open for drainage purposes and there is usually some mild to moderate swelling for several days after the procedure.  The new gelding is confined to stall rest for the first 24 hours after surgery, but then we encourage movement and activity during those next few days to help alleviate some of the swelling and stimulate additional drainage.

Next time you have a stud colt in need of castration know that A) Dr. Hartman will do everything prior to surgery to minimize the risk of complications and B) know that she will come prepared with a power drill and extra batteries! 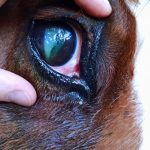 Eye Injuries – What Should You Do?Ask A Vet, Blog, First aid, Ophthalmic