Emerging Infectious Diseases: What you need to know

Ten years ago, it was quite uncommon to order diagnostic testing for Equine Protozoal Myeloencephalitis (EPM) in horses demonstrating signs of neurologic disease in Colorado.  Additionally, it was rare to evaluate equine patients for Lyme Disease in Western states.  That all appears to be changing.

Lyme Disease is a tick transmitted infection caused by the bacteria Borellia burgdorferi, and to a lesser extent, Borellia mayonii.  Historically, only the tick species Ixodes scapularus and Ixodes pacificus(black legged ticks)were known to carry these bacteria, and neither of these species were found in Colorado.  While there have only been seven cases of Lyme Disease reported to the CDC in Colorado since 2019, there is a high probability that a lack of biosurveillance and underreporting have resulted in an underrepresentation of Lyme Disease in the state.  According to the CDC, all seven cases of Lyme Disease in 2019 originated from outside of Colorado.

The black legged tick resides mostly along both coasts of the United States, as well as all Midwestern states from as far north as Minnesota and as far south as Texas.  Many of these ticks have been found in Utah as well, Colorado’s most immediate western neighbor.  As our climate begins to change so too will the tick populations within the western states.  The most important thing horse owners can do to protect their horses from tick borne disease is to perform thorough examinations of your horse’s legs and underbelly, neck, armpits, and chest for any evidence of ticks.  Initially they may feel like a small growth or skin tag, but upon further examination, it will become apparent that it’s actually an external parasite.  Care should be exercised when removing these creatures from your horse’s skin to ensure that the head is grasped tight enough to facilitate removal along with the body but not too tight to cause premature squishing of the tick prior to detachment.  Tick bites usually result in a local inflammatory response so evidence remains even after natural detachment in the form of a small scab.

Testing for Lyme Disease is via a simple blood test which is then sent to Cornell University.  The current test in use is called a Lyme MultiPlex Assay and enables us to differentiate between acute and chronic infections.  This information in turn is used to pursue the optimal treatment option for each individual case.  Horses can never be cured of Lyme disease, but through prolonged treatment regimens, clinical symptoms can often be put into remission.  Patients with previous exposure to Lyme disease are always susceptible to relapse.  Symptoms of Lyme disease include lethargy, a history of poor performance, ventral limb edema, shifting leg lameness and a multitude of other nonspecific clinical signs.

Equine Protozoal Myeloencephalitis (EPM) is another disease that is associated with a varying array of clinical signs.  Mild symptoms can be as vague as a history of poor performance.  More severe signs are associated with neurologic deficits and can even progress to recumbency.  EPM is found in the feces of opossums infected with the protozoa parasites Sarcocystis neurona and Neospora hughesi.  When horses ingest the feces of infected opossums, there exists a significant risk of the establishment of infection with the protozoa in the horse’s central nervous system.  Currently, the opossum population in Colorado does not carry the protozoa responsible for EPM, but, horses that travel outside of Colorado into EPM endemic areas are at an increased risk of exposure and development of EPM.

Like Lyme Disease, horses infected with EPM will always have a risk of relapse of clinical symptoms, even after extensive therapy.  There is no permanent cure.  Diagnosis is achieved through blood testing as well as the acquisition of a sample of cerebral spinal fluid (CSF).  CSF is more specific than blood in confirming a diagnosis of EPM but the risks associated with the collection of a CSF sample are far greater.  Treatment of EPM does not offer a cure for the disease but instead aims to decrease the severity of clinical signs.  Usually, we anticipate an improvement of one grade of ataxia on Mayhew’s grading scale for ataxia after completion of a therapeutic regimen.  As such, if a horse has a starting ataxia grade of 1/5, the prognosis for return to work after treatment is optimistic.  If a horse is starting at an ataxia grade of 3 or 4/5 prior to treatment, the prognosis for a full return to work is much more grave.

While we are seeing an increase in both Lyme disease and EPM in our patients, the risk of contracting either disease if your horse never leaves Colorado is still quite low, but not impossible.  We as equine practitioners will continue to think outside the box and ensure that all possible explanations for your horse’s clinical signs have been pursued and ruled in or out. 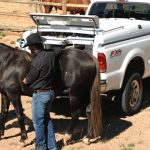 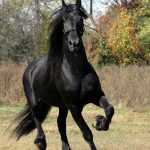 Common Eye Conditions and When to Call Your VeterinarianBlog