Choke in humans is often an obstruction of the trachea leading to a restriction in the air passage into the lungs.  In horses, “choke” is an esophageal obstruction, and in contrast to the human condition – where there may be immediate danger from a lack of air – in horses, choke is a serious condition but most of the time not an immediately life threatening one.  That said, there are complications that can arise secondary to the choke, which can become life threatening. The causes of a choke are really up to the imagination of the horse.  Anything a horse believes that they can eat could potentially become an obstruction in the esophagus.  Probably the most common scenario is a hungry horse who has poor teeth (which means they are usually elderly), and takes in too much pelletized (ie senior) feed at once.  This mouthful of feed, once the moisture of saliva is added, becomes a single mass and is often referred to as a “bolt.”  Once inside the restricted space of the esophagus, where a little more moisture is added by the body, it swells and completely blocks anything (food or water) from passing through to the stomach.

Other common things are carrots or apples (which weren’t pieced before being given to the horse) and alfalfa or hay cubes.  From there, we get into the truly strange things- peach pits, fecal balls, hair balls, and really anything that a horse might think he should chew on and swallow!

Where does Choke Occur

There are a few locations in the esophagus which lend themselves to stopping food.  Anatomically there are natural “slow spots”, and these locations become important information you can give your vet when you call.  If you believe the choke is “higher” (meaning near the throat area, or even in the neck – LEFT SIDE – where you can see or feel the mass), the vet may want to advise you differently than one which is lower (at the point where the esophagus enters the chest, or even as low as the point it enters the stomach).

Again, the choke itself is usually not life threatening, but the complications which can arise secondarily certainly can be.

Once a choke is in place, it is like plugging a tube.  Even if the horse is not eating or drinking, the act of swallowing saliva will eventually “fill the tube.”  Once the esophagus is “full,” there will be a discharge starting from the nose.  Usually it is from both nostrils, and initially can be mostly feed and water, but often will turn from a clear to cloudy discharge.  This discharge is the backed-up saliva.

At this point there is usually a “rattling” sound when breathing, which is the horse trying to breathe around the saliva that is pouring back out of the blocked esophagus.  It is this action that leads one of the biggest concerns in the days following the choke:  Aspiration pneumonia.  Aspiration pneumonia is an infection of the lungs resulting from the horse breathing saliva, feed and water into the lungs.

Mechanically the object stuck in the esophagus is usually stretching the lining.  This lining and the muscles behind it have a tendency to stricture (or get smaller) as part of the scarring process after an episode of choke.  If this occurs, it certainly increases the horses’ risk for a recurrence of choke.

As with many conditions, prevention becomes the most important part of the program.  Regular dental care and an appropriate diet can mitigate many cases of choke.  Discuss your horses’ dental condition and diet with your veterinarian for advice on how to tailor your horses’ diet to mitigate the risk of choke.

After your veterinarian has removed the mass causing the choke episode, your horses’ esophagus will be tender and sore. Remember the last time you got something large or even just pointy stuck in your throat and you will have some idea of how your horse is feeling.

An almost-liquid diet (literally the consistency of soup) is recommended for a few days following a choke episode as your horse heals. Soaking complete feed pellets in a large quantity of water will produce this consistency. Introduce more solid chunks slowly (think a few days of “stew” consistency, followed by a few days of “oatmeal” consistency) before you start to re-introduce hay after about a week. Wetting small quantities of hay so it’s soft and easily chewed is a good idea for the first few feedings before you start giving it to your horse dry again. This slow re-introduction will give your horse time to heal, and reduce the likelihood of you walking into the barn the next day to a new case of choke.

If your horse does choke, it is certainly an equine emergency, and attention sooner rather than later can improve the chances of a favorable outcome.

Wound Care – When Should you Call Your Veterinarian?Blog, First aid, Infections, Lameness 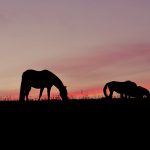 What Happens When it’s Time to Say Goodbye?Ask A Vet, Blog, Euthanasia