Choke in humans is often an obstruction of the trachea leading to a restriction or complete blockage of air passing into the lungs – something that is instantly life-threatening.  In horses, “choke” is an esophageal obstruction, usually due to poorly masticated (chewed) food,  which doesn’t obstruct the passage of air to the lungs.  Thus, in horses, choke is a serious condition but most of the time, not an immediately life-threatening one.  That said, there are complications that can arise secondary to the choke, which can become life-threatening.

Anything a horse believes that they can eat could potentially become an obstruction in the esophagus, causing a primary choke.  A very common scenario is a hungry horse with poor teeth (either young or old), that takes in too much pelletized feed at once.  Think of that aggressive eater who dives right into their bowl.  This mouthful of feed, once the moisture of saliva is added, becomes a single mass and is often referred to as a “bolt.”  Once inside the restricted space of the esophagus, where a little more moisture is added by the body, it swells and completely blocks anything (food or water) from passing through to the stomach.

Other common things are carrots or apples (which weren’t pieced before being given to the horse) and alfalfa or hay cubes.  From there, we get into the truly strange things- peach pits, fecal balls, hairballs, and really anything that a horse might think he should chew on and swallow.

A secondary obstruction is a dysfunctional or misshapen tube.  (Envisioning the gastrointestinal tract like a series of tubes quite simplifies the system, but effectively that’s all it is.)  So, if there is a stricture (narrowing) or a mass, then it increases the likelihood of feed material getting caught up.  Similarly, if there is a loose spot (balloon-like structure), known as a diverticulum, material can gather there and set up for a blockage.  Friesian horses get a special mention here because they are over-represented in this group. Friesians have a congenital or hereditary predilection to “megaesophagus” – an enlargement of the esophagus that is often associated with a decreased motility.

Secondary choke can be neuromuscular in nature as well.  There is a normal peristaltic action to the esophagus, which moves food down to the stomach.   Certain neuromuscular diseases interrupt this normal movement resulting in a choke situation.

How do I know if my horse is choking?

If the horse has a plug in the tube, even if the horse is not eating or drinking the act of swallowing saliva will eventually “fill the tube.”   Once the esophagus is “full,” there will be a discharge starting from the nose.  Usually it is from both nostrils, and initially can be mostly feed and water, but often will turn from a clear to cloudy discharge.  This discharge is the backed-up saliva.

At this point, there is usually a “rattling” sound when breathing, which is the horse trying to breathe around the saliva that is pouring back out of the blocked esophagus.  It is this action that leads one of the biggest concerns in the days following the choke:  Aspiration Pneumonia.  Aspiration pneumonia is an infection of the lungs resulting from the horse breathing saliva, feed and water into the lungs.  To minimize these risks, we prefer to resolve chokes as quickly as possible.

As with many conditions, prevention becomes the most important part of management.  Regular dental care and an appropriate diet can mitigate many cases of choke.  Discuss your horses’ dental condition and diet with your veterinarian for advice on how to tailor your horses’ diet to mitigate the risk of choke.  Know that if a horse has previously choked, depending on the severity, there can be an increased risk for another choke. Unfortunately, the hereditary and neuromuscular diseases seem to rear their ugly head when they want to, so there is not a lot to be done about those from a preventative standpoint.

As always, if you have any questions talk to your veterinarian. 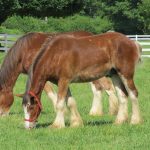 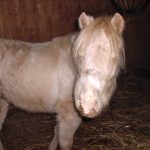