Lucky had facial nerve paralysis and a corneal ulcer, both secondary to some sort of pasture trauma. Topically medicating a serious eye ulceration is always challenging, but Lucky’s inability to blink added an additional complication. Blinking is a vital defense mechanism to protect the eye and keep the cornea lubricated. Without lubrication the eye would only get worse.

In order to medicate the eye and facilitate healing, a sub-palpebral lavage system was placed. (See photo). The device uses a small thin catheter that is placed through the skin of the eyelid to allow medication delivery directly to the surface of the eye. In addition to anti-inflammatory and antibiotic eye solutions, natural tears were also administered through this system to lubricate and protect the eye while Lucky was unable to blink. Treatment for the Facial Nerve Paralysis

Acupuncture was used to stimulate the nerves in Lucky’s face – the goal being to restore nerve function and thus his ability to blink, move his right ear, and use the right side of his muzzle.

Equine acupuncture dates back as far as 2000-3000 BC in China. The traditional Chinese medicine (TCM) approach uses meridians drawn over the body as a map of acupuncture points. Medical acupuncture charts acupuncture points by anatomical location of nerves. Both approaches work the same way – by using small needles at specific points to stimulate the nervous system and in turn, affect all body systems. For Lucky, points corresponding to the facial nerve were used.

Electroacupuncture was used to further stimulate certain points. Electroacupuncture uses small electrodes attached to specific needles so that a low pulsating current is applied.  The electroacupuncture unit is adjusted to apply variable frequency and intensity to stimulate the point/nerve. Most treatment sessions last 30-60 minutes. Typically, horses find this treatment relaxing and Lucky often took a nap during his acupuncture appointment.

About two months post-injury, a slight twitch of the right ear was seen during the acupuncture session. After this, Lucky gradually regained normal ear movement. At four months, Lucky’s right eyelid began twitching during electroacupuncture treatment. At five months, the corneal ulcer had healed, leaving a scar on the cornea, but the sub-palpebral lavage system was left in place to continually lubricate the eye. Finally, at six months, Lucky was able to fully blink, and the sub-palpebral lavage system was removed.

Currently, Lucky is about nine months post-injury. His right eye and right ear are back to normal, but he is still unable to move the right side of his muzzle. He eats a senior mash diet well, but has some difficulty chewing hay. Recently, Lucky’s owner has observed a very slight twitch of the right nostril, so electroacupuncture treatments have been continued to stimulate the nerve in this area and hopefully help him regain movement in his muzzle. Some observations from Lucky’s owner

Lucky’s owner noticed that once the ear began to move at about two months, progress continued slowly but steadily. She observed that immediately following an acupuncture session, it seemed there was less eye or ear movement followed by noticeable improvement two to three days later. She wants remind horse owners to be patient when dealing with this sort of injury, and credits acupuncture with Lucky’s progress to date.

MVS would like to thank Lucky’s owner for such dedication to his recovery. Lucky’s story is just one example of incorporating acupuncture along with western medicine to provide comprehensive care and healing. Acupuncture is also a great adjunctive therapy for lameness/performance issues. If you have questions about acupuncture or are interested in an acupuncture evaluation for your horse, please call us! 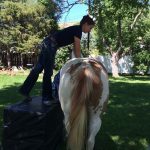