The mention of strangles among horseman is enough to elicit a cringeworthy response comparable to colic.  We all know it’s wildly contagious and we should avoid it like the plague, but what else do we need to know to keep our herd safe?

Strangles is a respiratory infection caused by bacteria called Streptococcus equi subspecies equi (referred to a S. equi).  Infections are routinely found in the upper airways and lymph nodes of the head and neck.  The most commonly affected lymph nodes are the submandibular (under the jaw) and retropharyngeal nodes (located between poll and throatlatch), and infections of the retropharyngeal nodes may erupt into the guttural pouches, where the infection can hide and spread even from a seemingly healthy horse.

Infection with Strep equi is commonly associated with elevated temperatures, copious amounts of thick nasal discharge and abscessation of the aforementioned lymph nodes.  The bacteria are spread via nasal secretions and drainage from abscesses.  This can either be via direct, nose to nose contact, or via a human carrier.  Due to the ease with which the Strep equi bacterium is spread, biosecurity plays a predominant role in stopping and preventing the spread of infection.

When monitoring your horse for strangles, an increase in rectal temperature is by far one of the most important indicators of infection.  The normal rectal temperature of a horse is 99.5-101.5◦F.  Temperatures should be obtained twice a day during an outbreak.

Quarantine and Biosecurity – Stopping the Spread of Strangles

Any horses with an elevated rectal temperature should be quarantined away from healthy horses.  Additional actions aimed at reducing the spread of Strep equi include:

Should You Vaccinate for Strangles?

During an outbreak, clients routinely inquire about vaccination for strangles.  Dr. Baird and I feel that the risks associated with vaccination are grater than the disease process itself.  Strangles is rarely life threatening and is merely an inconvenient upper respiratory infection.  Most uncomplicated cases clear on their own without veterinary intervention or the use of antibiotics.  Use of antibiotics in strangles cases, especially in young horses, precludes them from developing an adequate immunity to the Strep equi bacteria and makes them more susceptible to future reinfection.  An exception to the vaccination rule is young horses headed off to training in a high-density boarding situation with poor hygiene and inadequate biosecurity protocols.  Here, vaccination may not prevent the onset of disease but may lessen the severity of clinical signs.

Overall, it is important to keep in mind that spread of this highly contagious disease can indeed be prevented via strict biosecurity protocols.  In addition, we do NOT vaccinate normal, healthy horses for strangles in most situations, nor do we vaccinate them in the face of a current outbreak.  Additional information on the Strep equi bacteria can be found on the American Association of Equine Practitioner’s website. 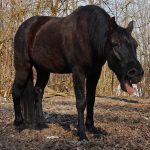 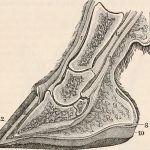